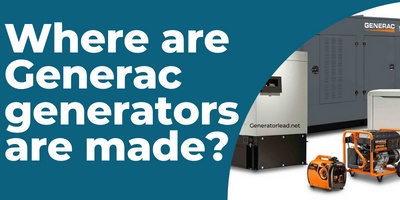 Generac generators are made in Wisconsin at the facilities of Generac Power Systems Inc. Generac has multiple plants in Wisconsin. They did transfer their production to China for a little while but later they brought the manufacturing back to the US.

Generac generators have been a famous name in the world of backup power for a very long time. They have been making some of the best gas-fed and solar battery storage generators as well as whole-home backup power. They have become a potent name within the generator industry by owning almost three-quarters of the market share.

Generac was founded back in 1959 and since then it has almost always had its manufacturing in the US except for the small period during which it was operating in China. In the beginning, Generac used to produce craftsman portable generators for companies such as Sears.

However, with time they moved on their own generators and since then they have gained over 60 years of experience in the industry. They offer a range of different sizes from the largest standby generators to the much smaller portable generators.

Are Generac generators made in China?

American companies haven’t been in good relations with China and so most of them have decided to move their businesses out of China. Even if they are not bringing production back to the US, they are moving it to other countries where conditions are more favorable.

Relations between Generac and Briggs & Stratton

Currently, the CCMP capital of New York owns Generac. They purchased Generac back in 2006. Previously, CCMP was known by the name of JP Morgan partners. They have continued to be the owners of Generac till now.

Generac sold its “portable products” branch to Briggs & Stratton in 1998. Their non-compete agreement ended in 2007 after which they opened up their own portable products branch once again.

According to us, the best Generac generator is the Generac 7117 Gp2200I W 50St Inverter due to its power output as well as portable design. The starting power is rated at 2200W while the running power can go up to 1700W.

It produces clean power and stable power which can easily help run sensitive devices such as mobile phones and other gadgets. At the same time, it also comes with LED status lights as well as a huge fuel tank for long runtimes.

In this article, we discussed where Generac generators are made. Generac generators are made in the US in the state of Wisconsin. We also discussed how production was moved to China for a short while and the relationship between Briggs & Stratton and Generac. We believe that the Generac 7117 Gp2200I W 50St Inverter is the best Generac as it offers a high and stable power output along with a portable design. If you have more questions, ask us in the comments section. Good luck!

Hi, I’m Shane Steele (Mechanical Engineer). I have build this website to write about the Generators. First i test the Generator myself then write the reviews. I do research and take reviews from other consumers too. My aim is to provide best picks so you don't waste your time and Money.

Champion generators are made in Zhejiang, China even though it is an American company. The company, however, is regulated by Americans. These generators are phone-engineered in California and then they…

Westinghouse generators are made by Westinghouse Corporation Pvt. Ltd. It is based in the USA and features a wide range of generators that are manufactured in China or Vietnam, which…

Briggs and Stratton is a USA-based company that manufactures its generators in 13 different facilities in the US including Missouri, Poplar Bluff, Murray, Georgia, Kentucky, etc. Apart from this, they…

The main difference between an inverter and a generator is that generators are complex machines. They are huge and heavy and take considerable time to begin functioning. Whereas, the inverter…

Wen generators are made by the Wen Corporation which is a US-based company. Wen corporation offers various generators for both commercial and residential applications. Want to invest in a powerful…

Kohler generators are made by Kohler Power Corporation in Wisconsin, the USA where the main manufacturing takes place near the village of Saukville, while they also have production plants in…

Hi, I am Shane Steele an expert generator mechanic and founder of the Generator Leads. Read more

How to Ground a Portable Generator

Paralleling Generators: How it works?
How Generator Works – Detailed Guide

“GeneratorLead.net is a participant in the Amazon Services LLC Associates Program. As an Amazon Associate we earn from qualifying purchases.”